We arrived in Florence on Sunday, September 15 in the early evening. Bright and early the next morning I began classes at Amy Florence Mosley’s studio located on Piazzale Donatello (just 10 minutes further walk north from Angel Academy and 3o minutes from my apartment.) I will study with Amy until November 8. The first exercise was a “warm up” with two charcoal portraits. One in the morning and one in the afternoon for two days—a total of 6 hours with each model. These were done on Fabriano Roma paper. The point of these drawings was to get acquainted with Amy’s style of teaching “sight-size” drawing. This set up creates a portrait that is nearly 1:1 life size. The paper, taped flush right (I was working on the left of the model) to a plywood board is centered on the face. The front-to-back plane is aligned with the ears. By standing away from the picture plane approximately 3X the width of the model-to-drawing, one can better judge the overall features. At close range, one’s vision is limited to about 30% accuracy.

The male model was in the morning. This sequence of images illustrates the continual adjustments to the face—beginning with a rough-in and ending with the final image. I tend to initially make the face too side, the right front of the forehead to pronounced and get the eyes in the wrong horizontal position. I also tend to undersize the back of the head. With each pass I am beginning to recognize these personal idiosyncrasies and make the appropriate adjustments. 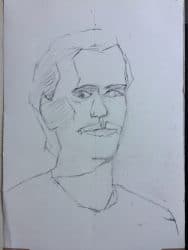 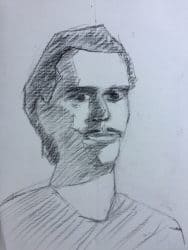 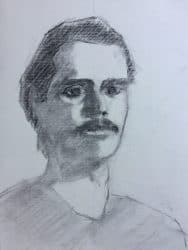 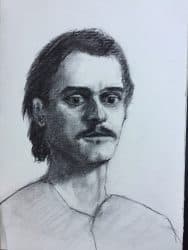 In the afternoon I had a female model,. This was her first modeling job—and she did very well. She held her pose and was very pleasant when asked to make adjustments. I did correct my tendencies earlier on in this portrait. The most difficult aspect on this portrait was getting the angle, shading and fullness of the lips correct. 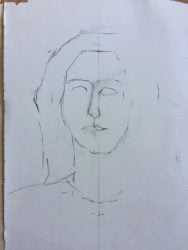 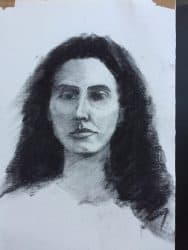 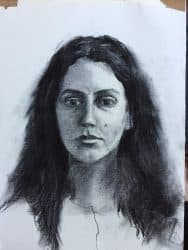 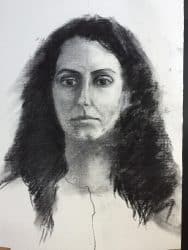 On Wednesday I began a 6-day oil portrait of the same models in the same sequence. I began using a dry-brush of sepia color paint to sketch in the outline. Since I had just finished a 6 hour charcoal drawing of each, I could begin at a more advance state—and refer back to the charcoal drawing. I was also more deliberate since oil is such much less forgiving than charcoal. I still tended to make the head to squat; put the eyes in the wrong horizontal position and not get the mouth correct. But, I feel like I am making good progress since these are the first two sight-sized oil painting from live models that I have ever done. I also decided to change the blouse and hair style of the female model. 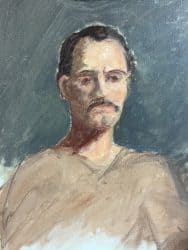 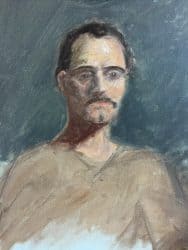