I am in a strange mood regarding the choice between the two last candidates standing for the Democratic candidacy.   For my whole voting life, I have always voted the democratic party’s ticket. I also have a deep appreciation for and belief in the democratic process and trust the majority vote. Of course, there are always glitches in any system: Gore v Bush and Trump v Clinton are the two most glaring exceptions to the rule. Hindsight nearly always reveals illegality. For instance, we now know, thanks to Robert Caro and many others, that LBJ played many dirty and illegal tricks to work his way to the presidency. Yet he spearheaded the Civil Rights Act of 1964. 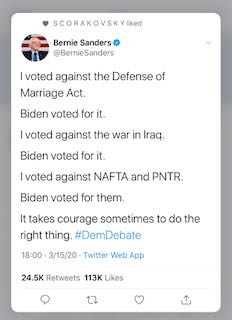 Recently, on my Facebook page, I posted this screenshot of a tweet from Bernie Sanders. His voting record was recited to make the point, in Mr Sander’s opinion, that Mr Biden was not a candidate that supports gay rights, peace, and protecting US jobs. Mr Sanders stated “It takes courage sometimes to do the right thing.” I was puzzled a bit by his insertion of “sometimes” since, in my experience, the correct adverb is “always” in this country. I believe and trust that Mr Sanders has, in his core, a deep respect for rule-of-law, human rights and equitable systems of sharing our collective wealth. He is truly a genuine and consistent man that I greatly admire. For the exact same reasons, I also admire many of the other candidates that have dropped out of the race.

As I have learned in the last 71 years, nothing is simple nor black and white. When faced with death, as many of my father’s generation did in World War II, humans act in unpredictable ways. When faced with the US Constitution and our messy tripartite form of government, humans can act irrationally and out-of-character—especially if they are not “getting their way.” But we are faced with, in my opinion, an existential threat to everything our forefathers and foremothers fought for: equity, social justice, a caring and resourceful government following the rule-of-law.

I am sure that Mr Biden has many skeletons in his closet (s). We all do. But I am sure that he will be cautious, learn from his past mistakes and lead our country out of the darkest four years we have ever experienced. I forgive him for the many “transgressions” highlighted, repeatedly, and in some cases correctly, by Mr Sander’s ardent supporters. I will not forgive them if they sabotage the effort to get rid of the DJTVID-45 virus. At this moment in time we need stability and leadership. We need experience. We will need tenacity. We will need a Presidential Cabinet and Vice President that will tackle the un-doing of the wrongs put in place by #45. It will be an Herculean effort. For this reason, I will support Mr Biden should he prevail as the Democratic candidate.

We need L O V E now more than ever.